Other than religious circumcision, the reasoning for cutting off the foreskin usually falls into the ‘Medical’, ‘Cultural’ or ‘Rite of Passage’ categories. Medical circumcision which removes the foreskin as a requirement for so called ‘health’ benefits (there are no health benefits from circumcision unless it’s to remove a malignant growth) is carried out in The Philippines and South Korea (where myth induced herd mentality…through misinformation / disinformation and ‘rite of passage’ justification have emerged from the general confusion about why the procedure is performed). Interestingly, both of these countries were at one time occupied by the U.S military. Circumcision was then introduced into those two nations, whereupon it was promoted, eventually entrenching itself as a universal custom in a relatively short time span. The Philippines is reported to circumcise 93% of its male population when they are pre-pubescent boys, usually without anaesthetic. In South Korea, virtually no circumcision was performed before 1945 as it goes against Korea’s long and strong tradition of preserving the body as a gift from parents, but according to a 2002 study, 86.3% of South Korean males aged 14–29 were circumcised. It would seem that circumcision is now carried out almost universally (95%) on 10 to 12 year old boys under local anaesthetic from a combination of intense peer pressure and tenacious false, fixed beliefs from disinformation about the foreskin. Both, The Philippines and South Korea are evidence of how quickly this barbaric, atrocious and emasculating practice can entrench itself into a population. For totally unjustified and mystifying reasons these two nations are now denying their males the right to blissful pleasures obtained from their foreskin. Both countries are seemingly oblivious to the human rights issue and unfortunately there doesn’t seem to be any challenge or discouragement towards the practice, nor any resistance to halt the epidemic proportion of circumcisions in those two countries. 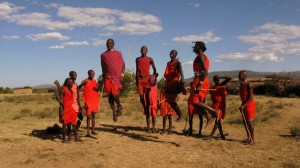 Cultural circumcision is done for reasons of membership to a group or tribe, which can also be called tribal circumcision, whereby males are initiated into the tribe by having their foreskins severed without anaesthetic. Circumcision in this situation is a symbolic rite of passage between boyhood and manhood. The distribution of circumcision and initiation rites throughout Africa, and the frequent resemblance between details of ceremonial procedure in areas thousands of miles apart, indicate that the circumcision ritual has an old tradition behind it and in its present form is the result of a long process of development. Tribes who practice circumcision as a membership initiation include the Kikuyu from Kenya and the Maasai from Kenya & Tanzania whereby male circumcision has historically been the graduation element of an educational program which taught tribal beliefs, practices, culture, religion and history to youth who were on the verge of becoming full-fledged members of society. The circumcision ceremony is very public, and requires a display of courage under the knife in order to maintain the honour and prestige of the young man and his family. The youths being circumcised were required to maintain a stoic expression and not to flinch from the pain. Once circumcised, the young men became members of the warrior class, and were free to date and marry. The graduates became a fraternity which served together, and continued to have mutual obligation to each other for life. In modern East Africa, the physical element of male circumcision remains in the societies that have historically practised it, but without most of the other accompanying rites, context and programmes. For many, the operation is now performed in private on one individual, in a hospital or doctor’s office. Anaesthesia is often used in such settings. There are tribes however, that do not accept this modernized practice. They insist on circumcision in a group ceremony, and a test of courage on the banks of a river. This more traditional approach is common amongst the Meru and the Kisii tribes of Kenya. Despite the loss of the rites and ceremonies that accompanied male circumcision in the past, the physical operation remains crucial to personal identity and pride, and acceptance in society. Uncircumcised men in these communities risk being “outed”, and subjected to ridicule as “boys”. There have been many cases of forced circumcision of men from such communities who are discovered to have escaped the ritual. 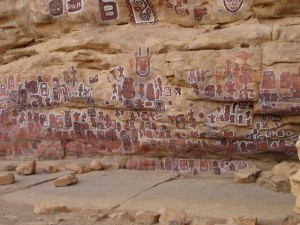 The Dogon are an ethnic group living in the central plateau region of Mali, in Western Africa. Their population numbers between 400,000 and 800,000. In Dogon thought, male and females are born with both sexual components. The clitoris is considered male, while the foreskin is considered to be female. Originally, for the Dogon, man was endowed with a dual soul, and circumcision eliminates the superfluous one. Rites of circumcision thus allow each sex to assume its proper physical identity. Boys are circumcised in age groups of three years, counting for example all boys between 9 and 12 years old. This marks the end of their youth, and they are now initiated. The blacksmith performs the circumcision. Afterwards, they stay for a few days in a hut separated from the rest of the village people, until the wound has healed. The circumcision is a reason for celebration and the initiated boys go around and receive presents. They make music on a special instrument that is made of a rod of wood and calabashed that makes the sound of a rattle. The village of Songho has a circumcision cave ornamented with red and white rock paintings of animals and plants. Nearby is a cave where music instruments are stored. The newly circumcised men must walk around naked for a month after the procedure so that their achievement in age can be admired by the citizens of the tribe. This practice has been passed down for generations and is always followed, even during winter. They are one of several African ethnic groups that practices female cutting. The majority of the Dogon women practice a class 2 circumcision, meaning that both the clitoris and the labia minora are removed. Girls are circumcised around the age of 7 or 8 years, sometimes younger. Circumcision for both male and female is seen as necessary for the individual to gain gender. Before circumcision they are seen as ‘neuter’.

In South Africa, certain ethnic groups traditionally circumcise as an initiation into manhood (ulwaluko). This ritual is practised by the Xhosa and is traditionally intended as a teaching institution to prepare boys for the responsibilities of manhood. The principles that lie at the very core of the ritual are respect for self (including self control and integrity), respect for family (not to bring shame to them), and respect for community (to protect them from harm). Nelson Mandela belonged to the Xhosa and in his autobiography ‘Long Walk to Freedom‘ he describes his circumcision…”Flinching or crying out was a sign of weakness and stigmatized one’s manhood. I was determined not to disgrace myself, the group or my guardian. Circumcision is a trial of bravery and stoicism; no anaesthetic is used; a man must suffer in silence…before I knew it, the old man was kneeling in front of me. I looked directly into his eyes. He was pale, and though the day was cold, his face was shining with perspiration. His hands moved so fast they seemed to be controlled by an otherworldly force. Without a word, he took my foreskin, pulled it forward, and then, in a single motion, brought down his assegai. I felt as if fire was shooting through my veins; the pain was so intense that I buried my chin in my chest. Many seconds seemed to pass before I remembered the cry, and then I recovered and called out, ‘Ndiyindoda!‘ (‘I am a man!’).”

A law was recently introduced requiring initiation schools to be licensed and only allowing circumcisions to be performed on youths aged 18 and older. But the Eastern Cape provincial Health Department admitted that boys as young as 11 had died. Each year thousands of young men go into the bush alone, without water, to attend initiation schools. Many do not survive the ordeal. Unfortunately, poor wound care following traditional circumcision remains the largest cause of mortality and morbidity. The two most common causes of local complications are impairment of the blood supply and bacterial infection of the circumcision wound. These two mechanisms are closely related. Impairment of the blood supply starves tissue of oxygen, which subsequently becomes more vulnerable to infection. Once infected, the tissues’ blood supply is further compromised by swelling and occlusion of blood vessels. This process leads to wet gangrene (infected dead tissue) if left untreated. Each year in South Africa, there are hundreds of penile mutilations, amputations and ultimately deaths from tribal circumcisions, and many deaths go unreported. 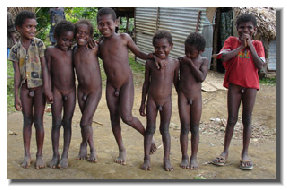 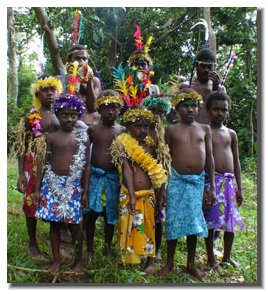 Returning from their circumcision

Many South Pacific Island nations such as Fiji, Vanuatu, Samoa, Tokelau, Tonga, Niue, Tahiti and some Indigenous Australian Aboriginal tribes in Arnhem Land and the desert areas of the Northern Territory and parts of Western and South Australia perform male circumcision as a cultural requirement or male rite of passage. It’s thought that circumcision was introduced to Australian Aborigines by Indonesian travellers who were circumcising themselves as Islamic people.

Depending on the culture, circumcision is either done in pre-pubescence, early adolescence or teenage years. If males are not circumcised they cannot partake as full members of these societies and are ostracised, so unfortunately keeping their foreskins is not an option for these men. In Tonga, Samoa, Niue and Tikopia, it is a source of shame not to be circumcised, and women will not look at a man with a foreskin, because they believe he is “not a real man.” It is such a sad state of affairs that to be considered a real man they have to give up the jewel of their masculine erotic birthright. 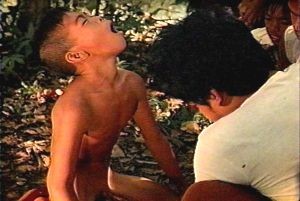 Circumcision of a Philippino boy without anaesthetic 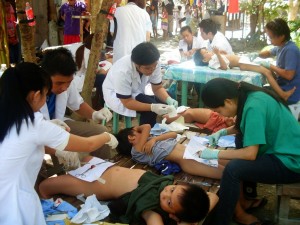 Traditional Circumcision and initiation into manhood (ulwaluko) is an ancient initiation ritual practiced by the Xhosa. 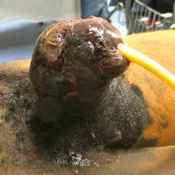 Penis with gangrene from complications of tribal circumcision in South Africa 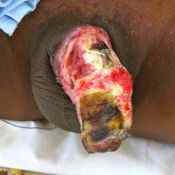 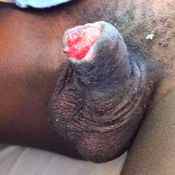 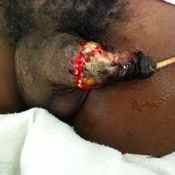 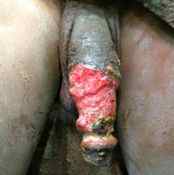 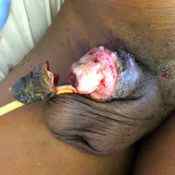 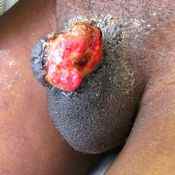